Head and neck alignment is extremely important, whether you are talking about basic standing posture or mid exercise.  When we look at our cervical spine, we have 7 vertebrae. The upper 2 vertebrae and the muscles around them function differently than the lower 5 vertebrae (bottom of C2 to top of T1), with the former rocking and tilting the skull/head and the latter moving and positioning the rest of the neck.  That being said, they all work/move together to flex, extend, rotate and side bend the head and neck. Any time the head is positioned forward excessively, as seen in forward head carriage, the region of the upper 2 cervical spine is compressed as the head cocks back in order to keep the body upright,  Much of the lower region is then excessively stretched and slacked.  This is bad not only because of the effects it has on the head and neck, but also because of the effects it has the rest of the way down the body. If the head is out of position, the thorax is then pushed back, which will cause the ribs to be out of position, disrupt breathing and stress the mid and low back; all undesirable things to have happen.  In response to this, the pelvis will tilt forward and the low back will over extend, causing even more low back stress and hip issues.  This all occurs in order to keep the body upright and centered in space.  The body always finds a way to “right” itself.  So when something is off up top or down low in the feet, compensations occur each joint up or down to help keep things upright and level as much as possible.  This picture sums it up pretty well and simply.  The only thing it does not show is the cocking back of the head that usually occurs. 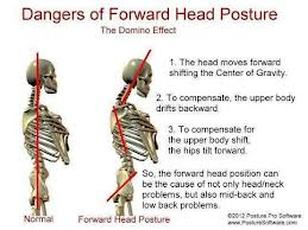 This is just the tip of the iceberg.  You can imagine what might happen if your head or neck are out of position during a squat or a pushup.  If it distorts positioning in a standing posture, you better believe that it will cause dysfunction with movement and in turn, hurt performance.  So, next time we cue your head position during your workout, you will have a decent idea why. If you would like to prance around like an ostrich with your head way out in front of you, that is perfectly fine; just don’t complain when things start hurting.

There are many things that contribute to this and that result from this, from muscular issues to breathing issues. If we look at the musculature of the neck region, we can divide things into front, sides and back (kind of). Starting with the front (anterior), we have the Sternocleidomastoid, more commonly just called the SCM. This muscle is responsible for neck flexion, rotation to the opposite side and some side bending. It is the most superficial, or outermost, muscle on the front of the neck and is often overactive in many people. When someone has forward head carriage, you can usually bet that their SCM will be overactive. This muscle also commonly compensates for weak abdominal, psoas and diaphragm muscles further on down the body. When someone works their ABZ with boatloads of  crunches and situps, you’ll often hear complaints of neck pain. Well guess what? Its because they are compensating like crazy with their SCM to do the job that the rectus abdominis (six pack muscle) is supposed to be doing.

Deep to, or beneath, the SCM are the deep neck flexor muscles, the longus colli and capitis. While the SCM typically will pull the head forward in front of the body, these deeper muscles will pull the chin back in towards the throat and promote a good head and neck posture. They are very commonly weak in many people, especially those with neck and breathing issues. They also run along the same line of fascia as the diaphragm and psoas muscles, which all should ideally work together to provide a solid, deep base of stability for the rest of the body to work off of.  There are also multiple small muscles in this area that control movement of the various bones of the jaw, called the infra and suprahyoids.  For the purposes of keeping this article simple, we’ll leave them out of the discussion.

Moving to the back side, we can look at muscles that control the different cervical sections mentioned above (C1-2 vs C3-7). The suboccipitals (rectus capitis major and minor, oblique capitis superior and inferior) control the rocking and tilting of the head and neck w/ movement of the upper cervicals. With forward head carriage, they will cock the skull back and become overactive and painful, often leading to headaches and neck pain. Research shows that these muscles also have big implications with balance and body awareness. Though they are small little guys, they are extremely important.  It has been shown that the rectus capitis minor even has connections with the dura mater of the brain.  (Must be kind of a big deal)

Below here, we have layers of muscles that control extension of the rest of the neck. Cervical erectors (further broken down to iliocostalis cervicis, longissimus cervicis and capitis and spinalis cervicis) mainly help extend the neck, splenius capitis and cervicis help extend and rotate the head and neck to the same side, and transversospinalis (further broken down to rotatores, multifidi and semispinalis cervicis) muscles help extend and rotate to the opposite side.  These guys cover the gist of it. We also have levator scapulae and upper traps branching off to the sides from the cervical spine to control both the shoulder girdle and the neck (elevation and rotation to the opposite side as well as downward and upward rotation of the scapula respectively), which are usually overactive in this situation (though not always).

Between the front and back, we have the scalenes, which can be divided into anterior, middle and posterior.  These help to side bend, rotate to the same side and flex the head and neck.  They are very important with upper rib positioning and overall neck stability, and should assist with breathing. (ASSIST not take over) 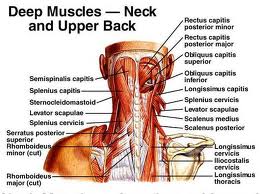 Note how many different angles the various muscles on the neck run, front to back, side to side, curving this way and that.  It is a very complex area of the body and you can see that each “section” is, in all reality, connected.To sum the basic situation up. When someone has poor neck alignment, or forward head carriage for the purposes of this article, the SCM’s and suboccipitals will be overactive and the deep neck flexors and lower cervical extensors will be inhibited and/or weak (sometimes with levator and/or upper trap being overactive). Throw some rotation into the picture and you will be looking at side to side differences. We can go further down and look at overactive pec minors with underactive low traps, elevated versus depressed shoulder girdle, etc. For now, we’ll keep it at the neck but just know that the effects carry on down the whole body and that there will be some variation depending on the individual at hand.

The bottom line is this: Keep your neck packed in alignment with the rest of your spine and trunk and you will feel better, move better and perform better.

In conjunction with this, proper breathing patterns and diaphragm function are also very important to help keep muscles in the neck region balanced out appropriately. Without good diaphragm function and solid rib expansion, rib elevation will cause muscles in the neck, especially the scalenes, to overwork and flare up with inflammation and pain. This can obviously affect overall alignment and is a very important deal.  Heck, though I haven’t gotten into it yet, vision issues can also have influence and be influenced by this stuff.  It really is pretty amazing.

Finally, talking about this anatomy stuff is all wonderful but when it comes down to it, you need to know how this looks in action, and this is the main thing I want to get across with this post.

This all carries over to multiple activities.  Hopefully this gives you some good ideas to help you out with life and training!  If you struggle with this issue, I recommend starting out with some “chin tuck” drills like I show in the first video.  Just do a few sets of 15-20 reps daily, starting straight up and then working to an incline and eventually face down.  Next, start consciously drilling the  proper positioning when you squat, deadlift, do pushups, etc.

When it comes down to it, you have two choices.  Be an ostrich or be a Beast with a solid and stable neck.  The choice is yours.